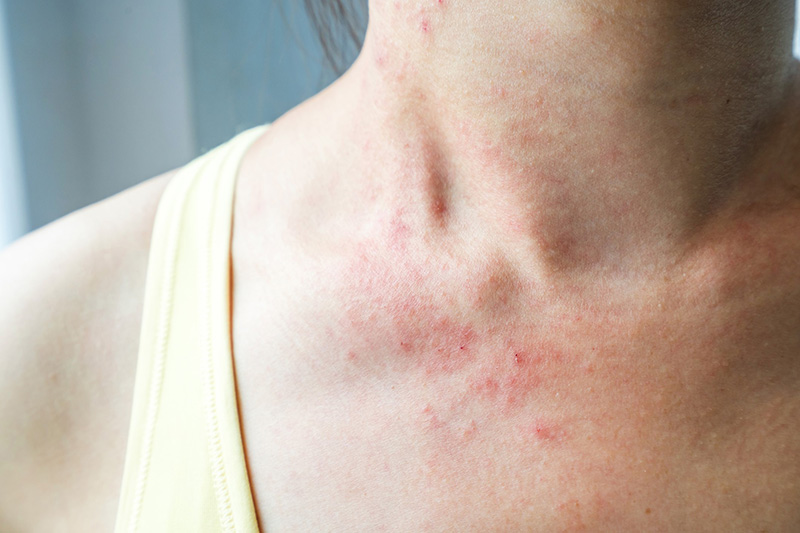 Also referred to as urticaria, hives is a very common skin condition that currently affects at least one person in five at some point in their lifetime. They are swollen plaques (wheals) or pale red bumps on your skin that usually appear suddenly. They usually resemble mosquito bites or nettle rash and are popularly described as itchy wheals. These itchy wheals can either appear as lines or round-shaped bumpy areas over your skin. They can appear nearly anywhere on your body including the ears, face, tongue, throat, and lips. They usually disappear within a day, but in some situations, they may take longer than usual to resolve.

Angioedema is strikingly similar to hives, however, the swelling generally occurs beneath the skin rather than on the skin surface. Angioedema is usually characterized by deep swelling around your lips, eyes, and sometimes around the genitals, hands, and feet. Generally, it lasts longer than hives. But, the swelling usually disappears in less than a day.

How Are Hives Diagnosed?

Your doctor will want to know the history as well as the onset of the appearance of your rash. This information will help make the diagnosis deemed most effective. Your doctor may need to perform a specific blood test to help detect the antibodies. You will need to talk to your doctor to find more. Click here to read about our allergy tests.

What Treatment Options Are Available for Hives?

In most people, it is usually difficult to establish the cause of the rash. And in nearly half of the cases, the rash may last between six and twelve months and disappear slowly.

Viable treatment options during an active rash period may include:

What Can I Do to Manage Hives?

You will want to create a hives diary to help you determine the potential triggers. And if any triggers are identified, you will need to avoid them at all costs.

When Should I Schedule an Appointment With My Doctor?

You should seek immediate medical attention if:

If you develop suspected angioedema symptoms, wheezing, experience breathing difficulty, or feel generally unwell, don’t hesitate to give us a call or visit our Ear and Allergy Clinic to schedule an appointment with our healthcare professionals.

What causes Hives and Angioedema?

Hives is caused by the release of histamine from the cells underneath the skin called mast cells.

In some, common specific triggers for the release of histamine include

Frustratingly, often, the underlying triggers are not able to be identified.

Medical conditions such as anemia or thyroid disease can exacerbate hives, and should be excluded.