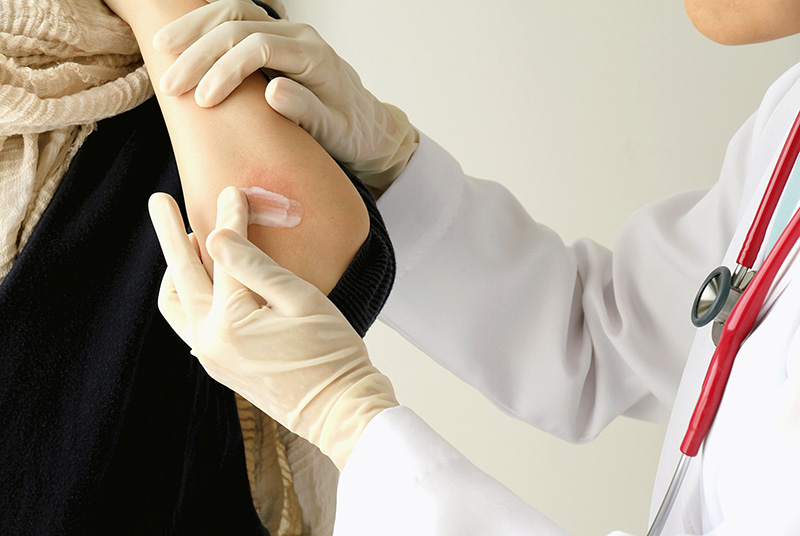 Eczema has become a common skin inflammation condition. This condition is common in children but can equally occur at any age, even in your adulthood.

Research has shown that nearly a third of kids with atopic eczema will develop either hay fever or asthma at some point. The condition affects both males and females equally.

What Are the Common Causes of Atopic Eczema?

Atopic eczema tends to run in families. It is widely believed that those having eczema suffer from skin barrier impairment and this predisposes them to the various triggers in their immediate surrounding. Eventually, this will result in an inflammatory, allergic, and itchy skin response.

Common environmental triggers for atopic eczema include corrosive detergents, soap, and chemicals. Others include your exposure to infection, viruses, bacteria, and allergens.

What Are Some Common Atopic Eczema Symptoms?

How is Eczema Diagnosed?

This can be a serious condition and may need the immediate attention of a healthcare expert. Well-trained doctors will be able to identify it through a physical evaluation. Your doctor may conduct a swab test to ascertain any concurrent skin infections on your body.

What Are the Common Triggers of Atopic Eczema Flare-ups?

Atopic dermatitis can be more prevalent in individuals in certain occupations that involve regular contact with chemicals. In this regard, cleaners, food handlers, healthcare workers, and hairdressers are more likely to suffer from eczema. And if you regularly use your bare hand to hold potential irritants and allergens, you will probably suffer hand eczema.

What Are the Treatment Options for Atopic Eczema?

On most occasions, atopic dermatitis is curable through medicated creams, moisturizers and ointments. The trick to effective treatment is to consistently use moisturizer, whereby you wash your skin using the moisturizer other than soap. This will help restore, maintain and improve the skin barrier of the affected individual, allowing the skin to function as an effective barrier against external environmental triggers.

Depending on the severity of your condition, your doctor may advise you to use ointment or creams to alleviate both the redness and itching of your atopic eczema, especially when the rashes are active. They are available in different doses and strengths so your doctor will offer you expert advice regarding the best medication to use. Though they have their fair share of negative connotations, steroid creams are safe and highly effective at managing eczema rashes.

Generally, you should not use natural herbal creams because they can easily result in irritation and allergic reactions

What measures can I take to manage my atopic eczema?

As you may have realized, eczema is a dangerous condition that needs prompt medical attention. If you suspect that you are suffering from eczema, don’t hesitate to give us a call or visit our Ear and Allergy Clinic to schedule an appointment with our healthcare professionals.